We have a week and a half left with C’s daughter before she goes back to her mom and we go back to having her every other weekend.  To make the most of her time with us we decided to take a camping trip on our property.  Our first overnight on the land, with no tent and three kids.  Stay with me, this does get better, I promise…

C has a topper on the bed of his truck, a big one.  We thought it would be good to set up a camping experience in the back of his truck.  We packed a ton of blankets and pillows, some hot dogs, marshmallows, and three jugs of water.  We arrived at about 5 and worked on the garden.   We had bought some cheap stakes to do us until the tomato plants got a bit bigger so we tied the tomatoes to them.  We also did a bit of weeding and put manure on our eggplants. 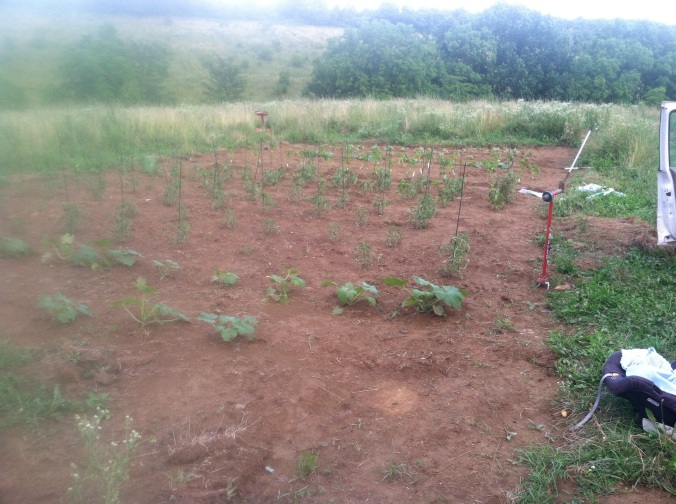 C went to get firewood to start our fire while I went to check the raspberries (i picked another half pint) and the 10 year old watched the little bit while the baby slept.  The entire time C and I were gone (maybe 30 minutes) the 10 year old was screaming little bit’s name as she ran after her to keep her out of everything.  Our new neighbors probably hate us already.

The wood was slightly damp and the matches were cheap but C finally got the fire going (it was really neat watching him get it started with such bad materials).  We put little bit in her carseat to get her to try and fall asleep but she was way too distracted by the food so I cooked 2 hotdog for her and gave her 3 marshmallows.  We all had fun cooking our food over the fire, even though the 10 year old was afraid of catching her food on fire, or having it blacken, so it took her FOREVER to cook anything.

Once we were done eating it was already dark.  C piled the kids in the back of the truck while I finished up a little bit of work.  Then I piled in too.  The bed of a truck is not meant to sleep two adults, a preteen, and two small children.  The first thing that must be mentioned is that the truck was on a slight hill, slanting towards the side where C and I were sleeping.  The 10 year old was in her sleeping bag sleeping with her head by the cab and took up half of the bed.  We were sleeping with our heads by the end of the bed (so opposite her).  I repeatedly put little bit on the bottom her sleeping bag and the 10 year old repeatedly tossed her back onto me with her feet.  Then there was the baby who has this idea that if he is anywhere near me he MUST be nursing.  So here I was sharing half of the bed with C, a nursing baby, and little bit being thrown on top of me over and over.  C was being squished into the wheel well of the bed, which was hurting his massively scratched up back (see the previous post).  At about 5am C says to me “you wanna just pack it up and go home”.  I resisted at first because I really wanted to say that we spent the whole night out there, until he reminded me that we used the last of the matches to start the fire and there weren’t any left to be able to heat the percolator for coffee in the morning.  We immediately packed everyone up and headed home.

It looks like we need to invest in a tent for the kids….