Unless you are wealthy and can (or not and just intend on) pay for absolutely everything in cash it's important to not only know your credit score, but to understand how it works and how to increase it.

I was convinced I had the worst possible credit score ever. I never paid attention to my credit score, I didn't think it was important. I got a card as soon as I hit college and maxed it out, frequently made late payments, and was just a kid about it. By the time I left college I had paid it off and was a slight bit more responsible but I still didn't understand how a credit card worked or how it affected your credit score. By now I had filed for bankruptcy (9 years ago), had divorced (which accumulated a lot of debt), had my house foreclosed on after not paying the mortgage for several years (this is a long story involving not wanting to share the house with my unemployed ex husband who refused to leave), and had been homeless for at least 6 months. My life was a mess and with it went my credit score, which I hadn't checked in over 10 years.

After C started working for Ford almost 2 years ago he started working in his credit. He wants to purchase a new truck after the house is finished but that won't be possible unless he works on his credit. He downloaded an app called Credit Karma and within 3 months had increased his score over 100 points and was able to obtain a credit card which has also helped increase his credit.

After much convincing (because I honestly wanted to pretend my credit score didn't exist) he talked me into joining as well, after about two months of persuasion. My score was terrible, although not as bad as I had expected. I was able to have two of the three old debts removed, and found out that the foreclosure actually helped my credit score. Apparently they just closed my old mortgage accounts so they no longer counted as a negative towards my score (very weird but I will take it). The thing that was counting against me the MOST was not having credit at all. I have only been on the app for maybe a month and a half but already my score is into the "fair" rating, allowing me to get a credit card which (if I am responsible about it) will increase my score even more.

Here are the things I have learned which should be taught to every teen before they leave home and have to figure it out on their own:

1) credit cards are great, and you should have one, if you use them correctly. How do you use them correctly? It honestly doesn't matter how much you charge on your card as long as you take it down to 30% or less by the end of the pay period. As long as your balance is less than 30% you are golden. We use our card for almost everything and pay it off as we go. We earn cash back pretty quickly that way and our bill is paid almost as soon as we get it. I mark the due date on our calendar every month, we make sure it's paid down to 30% or less and don't put anything else on it until after the new bill comes out. Paying your balance on your card should be just as important as paying your rent and utilities every month. As long as the balance from the last month is paid you don't accumulate interest, but you must remain diligent about it and not spend more than 30% of the credit line on emergency non budgeted stuff. That's the hard part, especially if you are poor.

2) Any delinquent accounts can be disputed. The larger the amount owed the less likely that you can get them removed this way, but if you can knock out the smaller ones you can call the larger ones and either work out a payment plan or (if you can, say at tax time) cut a deal with them to pay a partial amount and have it removed that way. Every delinquent account that you remove will raise your credit score.

3) the more hard inquiries you have to your score (every time you apply for a loan, credit card, etc and someone has to check your credit) the worse it looks on you. You are supposed to have 2 or less and they fall off every 2 years, but the more accounts you have the better your score is. C and I had a hard time with this one because how are you supposed to increase the number of accounts you have if you can't have hard inquires? Three ways. The first is to research cards before you apply for them to see if your score falls at or above the average score of people who obtained the card. Credit Karma has those numbers for the cards they recommend. You may have to go online to their website to fine it though. Don't rely on the "approval chance" that they give you, actually do the research. Secondly preapproved cards that you get in the mail don't produce a hard inquiry. You can apply for those. Lastly if you trust your partner and their spending habits you can be put on each others cards. C putting me on his card increased my credit score by 64 points. I in turn put him on my card which will bring his score up as well. This is risky though and I only recommend it if you openly discuss money and budgeting and trust each others spending habits.

4) Finally, and probably the hardest thing of all, be open and honest with yourself about your money. Being poor is hard. Being poor with a terrible credit score is next to impossible and so many of us live there. Don't spend more than you can pay off. Work hard to do whatever you need to do to increase your score and things will start to get better. You will be able to afford better loans (or a loan at all), better vehicles that don't fall apart, better housing, etc. if you need help with your budgeting please ask someone who is good at it for help. The first, and best, thing we did was go to a buy here pay here that was through a reputable car dealership. For us that was Sam swope. They report to the credit bureaus every payment and it's taken directly out of our account so we don't even have to think about it. The truck is a shitty truck but paying it on a regular basis was what helped C be able to get his first unsecured credit card. You can also start with a secured card and move up from there if buying a car isn't possible. The most important thing is to make sure you pay them on time every time.

I honestly don't know why this isn't taught in school, having a good credit score is basic American survival.

I was hoping to have the tires finished by now. It’s a little disappointing that we don’t, but we are almost finished with them!  We are currently working on the tires that will form nine feet of tire wall. After that we are using concrete to level it out to nine feet and then we have 6 more layers until it’s finished. Our goal is still to move in this year. It’s still possibly too. I want nothing more than to spend Christmas in the new house. The hardest part is finding people to work. We had three fantastic workers but are now down to one who can only come two days a week for 2-3 hours. We have had worse so I will continue plugging on. 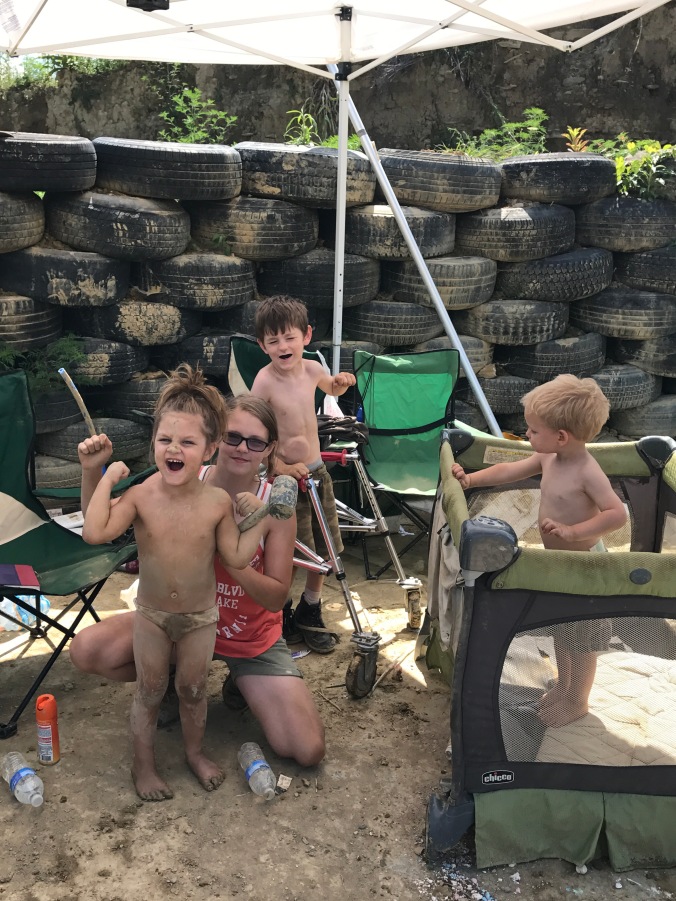 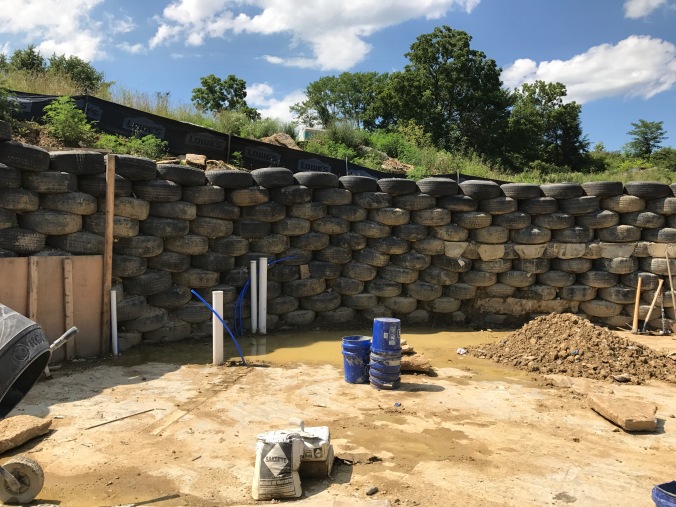 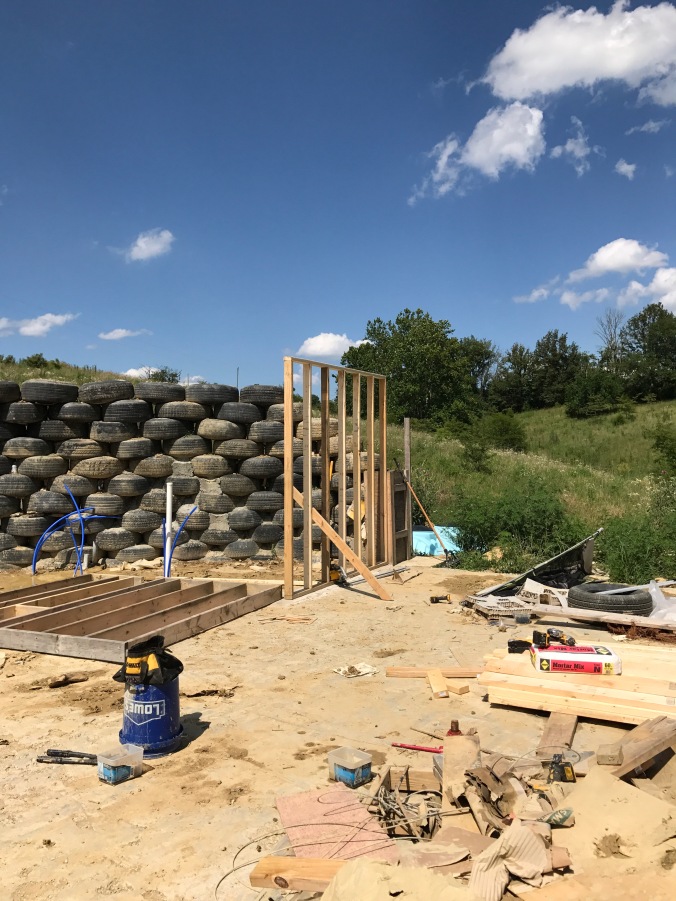 We took a short break after the mudslide. It was a fairly devastating time for us. After allowing ourselves to sulk we picked ourselves back up, made the executive decision to pay people to help, and put the wall back up. We had to dig out mud multiple times over multiple week until we could uncover all of the tires down to the second to bottom row. Then we started the rebuilding process, which involved shifting over 20 tires from a place of instability on the wall to the newly rebuilt section. We also added a layer of concrete to stabilize the bottom of the section that fell. Once the tires were rearranged we were finally able to start the rebuilding process. We had to manually unpack all of the tires that fell onto the concrete slab in order to get them back on the wall, then refill them. Last week we finally had the wall back up to the height it was before it fell. As of two days ago it was almost an entire level higher. We can oficially start putting the loft back up(although we want to pour a layer of concrete along the interior of the wall to create added stability). We are so close to being finished with the tires!!!